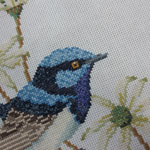 The Guild is a not for profit organization for people who love to embroider, stitch, sew, create with yarn and fibre, and just have fun making things. We get together every week, use our library, join in classes and take part in special interest groups and events. Our members range in age from 8 to 80 (and beyond). New members are welcome, whether beginners or experts (or anywhere in between), if you are a beginner, we will help to get you started.

We aim to be a centre of excellence for embroidery and needlework in the ACT. Members have access to experts in various techniques both inside and outside the Guild and they can explore, learn and delight in textile arts through our library.

The Guild maintains a library collection of over 3,000 items to support members in developing their interests and skills in the many elements of stitchery. The collection includes books, charts, magazines, CDs, videos, historical ephemera, reference items and teacher resources. As well as having excellent coverage of the many forms of embroidery, the collection includes related areas such as textile arts, lace making, patchwork and paper arts. There is an ongoing buying program so that members have access to the latest books and magazines.

Our heritage collection conserves important pieces of needlework, including pieces by early Canberran and Australian embroiderers. It is an important research archive for members as it includes examples of a wide range of embroidery techniques including ones that are at risk of being lost because they are no longer practiced. The collection includes a range of ethnic and international embroidery styles.

Early History of the Guild

The Guild was founded in 1962 when Doreen Warren, wife of the rector of the new Anglican church in O’Connor, was looking for people who might create the embroidered linen for the church. She gathered together a small group who became the founding members of the Guild. During the early years meetings were held in members’ homes. There were 31 members at the first Annual General meeting in 1963. In 1969 a Constitution was written and adopted and the group became the Embroiderers’ Guild ACT. The Guild was incorporated in 1983.

The Guild has a proud history of major contributions to public works of embroidery and other joint projects.