The Creative Group meets on the first Saturday of every month from 10.00 – 2.30 p.m. to play with fibre. For the last couple of months they’ve been experimenting with paper – mainly making cards and book binding.

Here are some of the results: 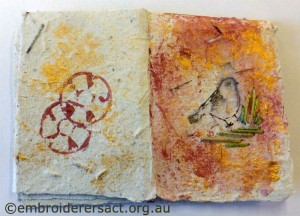 This bird card was made by Dorothy R who was busy splashing paint, stamping, stitching and generally manipulating paper. 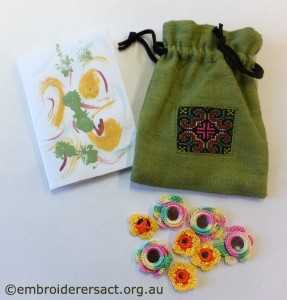 I couldn’t resist taking a photo of Pat B’s card with this pouch of crocheted sishas. They add a real pop of colour. 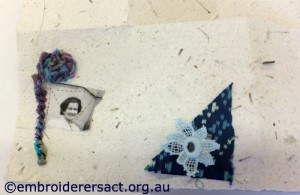 Dimity was experimenting with making a card that included a photo of her mum – her work really sparked some ideas for presenting family history photos in a fresh and relevant way. 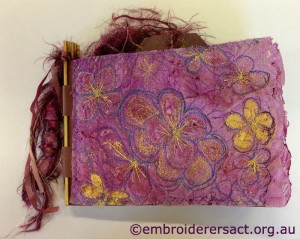 Last Saturday everyone tried their hand at bookbinding. Doreen G brought in some books she’d made for inspiration – look at this beauty. 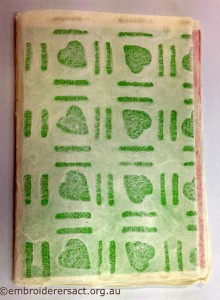 Pat B used handmade hearts paper for her book. 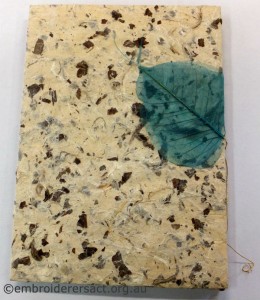 At one point Glenda was about to give up on the whole process but kept at it…..and look what she produced! The leaf detail is really cool. 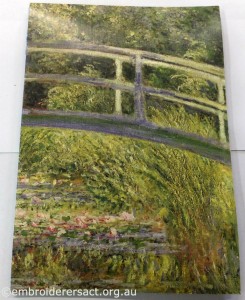 Meanwhile Fran upcycled a flier from a newspaper into an arty notebook.

The next get together of the Creative Group will be on 5 October and the business will be entrapment. This is putting found objects between layers of fabric. The possibilities will only be limited by your imagination.

Come and join in the fun!

The 6th International Italia Invita Forum of Textile Creativity was held in Parma, Italy from 10-12 May. I was lucky enough to be there for the whole three days. This is the first in a series of posts on what I saw there.

At one level Italia Invita is a Quilt and Craft Fair with suppliers from Italy, France, Spain and Germany. What makes it so much more than this is the fact many regional associations, specialist museums and Italian needlework schools have booths showcasing their traditional needlework and collections.

There were also two competitions with entries from Italy and some featured artists and displays. It covered two pavilions and was sensory overload and just wonderful.

Noriko Endo, a Japanese quilter, was a featured artist at Italia Invita. There were four of her works on display in an alcove in the first pavilion.

This display was not curated and so the only information available were the names of her quilts. In the end this turned out to be a positive as it meant I could look at her work in an unfettered way – without preconceptions about her technique, history or context in the quilting world.

…. and this is the first thing you saw as you walked through the turnstiles: 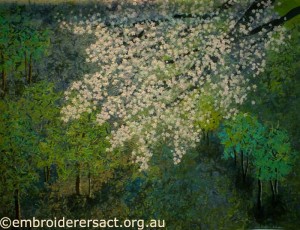 This quilt has a luminous quality which drew a continuous stream of people to it. It captures the intensity and exuberance of Spring but there’s also delicacy, restraint and stillness. Here’s a closer look: 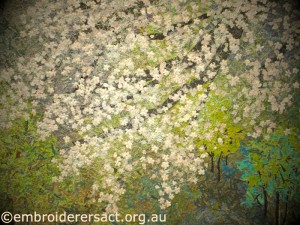 The sakura or cherry blossom has a depth created by a layering of the flowers. There were also areas of colour in the surrounding space that suggested blunt brush strokes.

Here’s another of the quilts on display Sylvan Ambience 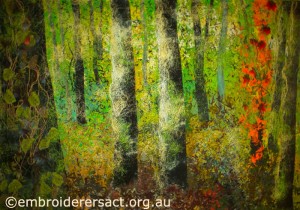 All four quilts were very thin. Looking at them closely (there were no rope barriers) suggested a painted surface which had then been densely covered in free motion quilting for texture. Machine embroidery usually in metallic threads was added to highlight features such as the tree trunks in the following details of birds in the quilt Guest Appearance 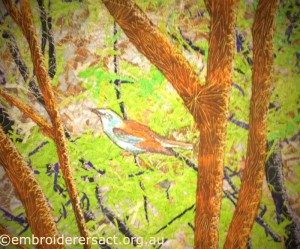 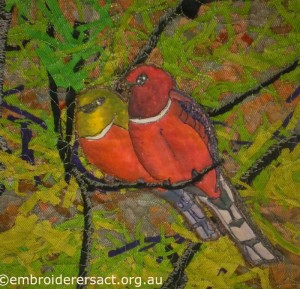 The painterly quality of the quilts turned out to be an illusion. When I came back to Canberra I did some research and discovered that Noriko Endo invented a quilting technique called Confetti Naturescapes.  As the name suggests she creates the picture by cutting fabric into small pieces (some as small as matchsticks) or shapes (the cherry blossom flowers) and then laying these out in the elements of the image. These are overlaid with tulle and quilted. Several layers are built up to create the colour and complexity of the scenes in her quilts.

The fourth quilt in the Italia Invita show was a tour de force called Peony: 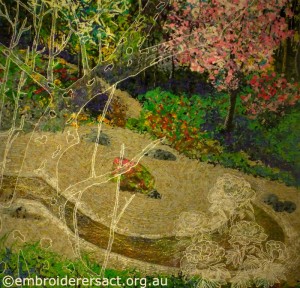 It had the added graphic element of the tree trunk and peonies in the foreground against the rich background of the raked stone garden and forest. The effect created was almost three dimensional. Peonies brought back memories of Kyoto and early morning visits to the stone garden of Ryoan-ji.

If you want to see more of her quilts Noriko Endo has a website with an extensive gallery. 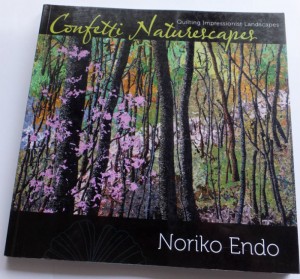 which thanks to Jan H will soon be in the Guild’s library.

And while we’re on the subject of things Italian…..

Jeanine of the Italian Needlework blog has recently written about Valentina Sardu and her blackwork  designs. If you’ve been looking for a fresh take on blackwork then it’s worth checking out Jeanine’s post and her link to Valentina’s on line shop.

One of the best things about writing the blog is that I get to look over everyone’s shoulders to see their work in progress.

Here’s a sampler of the work in progress in the evening group over the last 3 weeks: 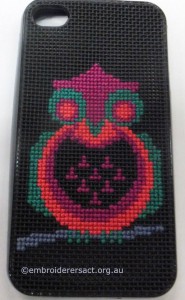 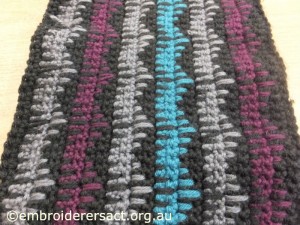 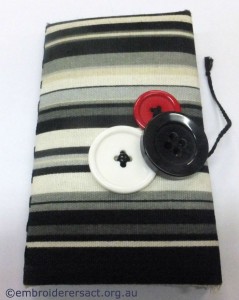 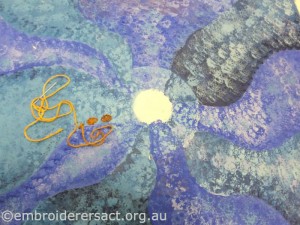 Heather was just beginning one her stunning stitched works on paper. You can see the vibrant blue tones she’s painted the paper and the start of the stitching.

Fran was meticulously creating stumpwork elements for a project called A Siennese Treasure. This is from a class by Alison Cole at the South Australian Guild’s Summer School 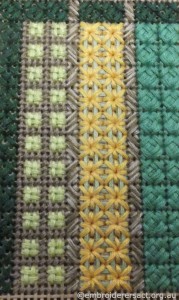 Prue was working on her own canvas work design called A Kitchen Garden. Her parterre design and the summery but soft colours give it the relaxing quality of a real garden. You’ll be able to see the finished work at the Guild’s Spring Exhibition at the Albert hall from 27-29 September. 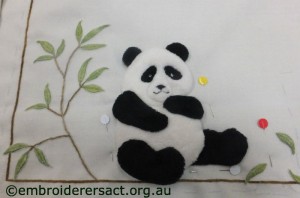 Elvi was nearly finished the cutest panda baby blanket for a very special new addition to her family. It’s a kit from Windflower with easy stitching and applique. You’ll also be able to see this in the Spring Exhibition 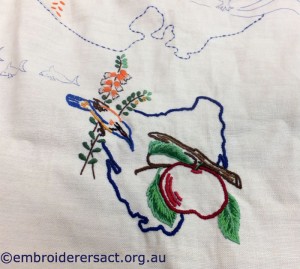 Anne E is a magnet for vintage embroidery as she’s passionate about saving these pieces and giving them a new lease of life. This piece is a 1950s Semco map of Australia – here’s the detail of Tasmania

Pat B was beading away on one of her own designs and making us all laugh with her stories about the latest crazy adventures of her dogs.

Last weekend a dozen or so of us joined Yvette Stanton at Gorman House for a workshop on Portuguese Whitework.

Yvette provided the kit which included her book Portuguese Whitework……and of course we all lined up to have our books signed. 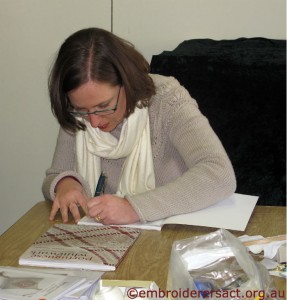 This style of embroidery is intricate and Yvette deftly steered us to the right way to draw threads, introduce new threads and do the bullions that are a feature of Guimaraes embroidery. The buzz over coffee was her very clever tip on how to do eyelets.

Here’s a sample of the work in progress: 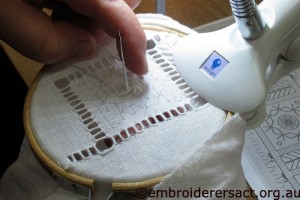 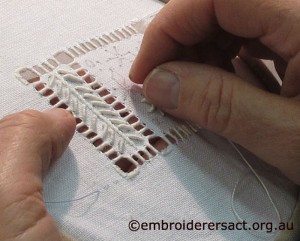 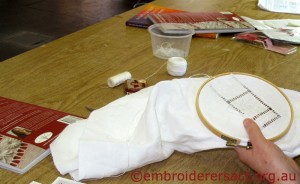 Thanks Yvette for a great workshop!

The latest issue of Inspirations magazine (No.79) includes a traditional Guimaraes embroidered bag from Portugal in redwork.  If you’d like to try this other style of Portuguese embroidery – see Inspirations Magazine

This bag is stitched by Meri Almeida of the agulhas da méri blog. She’s incredibly knowledgeable about Portuguese embroidery and very generous in showing readers how to do the various stitches. She writes in English and Portuguese so her blog is easy to read.

Have a great weekend!

Spring has arrived – the days are getting warmer and longer, the light is changing……the signs are all here that the long Canberra winter is coming to an end. Blossom and Spring flowers are everywhere 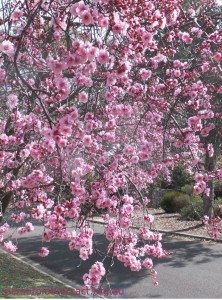 Floriade can’t be too far away 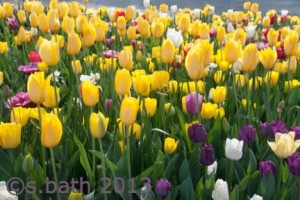 So what better time for a new project – our new website and blog. All the work for this website has been done by volunteers. A great example of the spirit and sense of community in the Guild. So a BIG thank you to everyone but most of all to Sharon Boggon.

We couldn’t have built this website without Sharon’s expertise and design flair. Sharon’s Pintangle site is one of the most loved and admired on the Web. So if you haven’t done a TAST (Take a Stitch Tuesday) or enjoyed the eye candy of Sharon’s crazy quilting and sampler then head over here and enjoy!

This is the beginning of our journey with the new website. We’ve only just begun to add the photos to the members gallery. When Sharon comes back in November from her amazing overseas trip we’re planning to add more galleries, features and newsy items.

In the meantime please be patient with us as we find our feet in this very new world of WordPress. There are bound to be some thrills and spills!

Now to other news! On Monday we had the last celebration for the Guild’s 50th birthday – a morning and evening tea. As usual there was the most amazing spread of food. Then our President Fran sprang a really cool surprise – a gift for everyone! 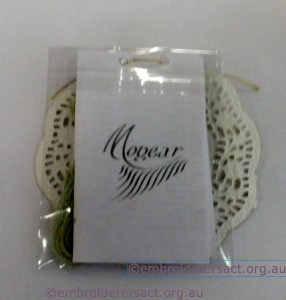 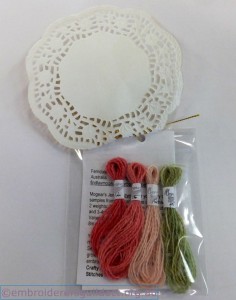 It was a pack of mohair threads in delicate jewel colours from Mogear. These threads have a local story as Mogear is based in Yass and owner Jenny Findlay has dyed all the threads herself in 90 shades – all of them lovely. So a BIG thank you to Jenny for an awesome gift and if you want a colour chart or more information then contact Jenny on 61 2 48458257