There were a couple of special museum exhibits at Italia Invita 2013.

One of them was this Museum which is located in Parma and focuses on the cultural heritage of Bourbon rule and in particular that of Maria Luigia of Hapsburg (1791-1847).

Maria Luigia was the oldest child of Franz 1st Emperor of Austria and Maria Teresa of the Two Sicilies. As part of a set of diplomatic moves she married Napoleon in 1810.

In 1815 the Congress of Vienna assigned her the Duchy of Parma, Piacenza and Guastalla and she arrived in Parma in 1816.

The exhibit at Italia Invita focused on textiles used and worn by Maria Luigia including her embroidery tools: 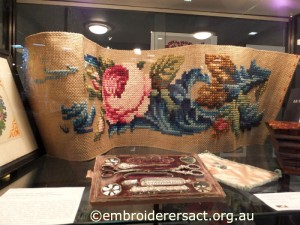 Here you can see the scissors and tools she used to create the cross stitch of flowers.

While in this photo we see her silk threads and a design for an embroidery. My apologies for the quality of the photo but it was impossible to avoid the reflections. 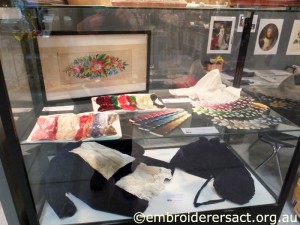 I found these personal objects very moving – they gave you a sense of her as a person and not just a historical figure. This was reinforced when we later went to the Museum itself and saw her watercolours and artefacts from other pastimes.

The Museum also has an extensive collection of costumes. This one was at Italia Invita: 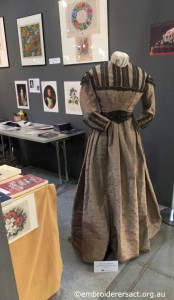 This is a gem of a museum and worth visiting if you’re in Parma. It came about as the result of the passion, energy and tenacity of Professor Glauco Lombardi (1881-1970).

Maria Luigia lived in turbulent times politically and after 1831 Austrian rule of Parma and other parts of Italy came under increasing attack from revolutionary uprisings – this period is known in Italian history as the Risorgimento. Over time the artefacts and objects belonging to Maria Luigia were dispersed in various Savoy palaces.

And this is where they remained until Professor Lombardi collected them and persuaded the relevant authorities to set up and fund the museum. It’s an inspiring story.

If by any chance you’re going to be in Parma on 29 September the Museo Glauco Lombardi will be holding an event dedicated to the lace of Emilia Romagna and Tuscany in the first half of the 19th century.

This was a small exhibition put on by a group called La Congrega from Ancona in the Marche region of Italy. Ancona is a port city on the Adriatic Sea and has a rich maritime history as a centre of trade.

La Congrega is a textile group that conserves, recycles and repurposes antique and second hand textiles. According to their website they are in the process of studying and cataloguing a data bank of some 2500 textiles.

This was an intriguing show that took you back to Ancona in the second half of the 16th century. In this period Ancona was a trade hub and a melting pot of peoples from all around the Mediterranean who brought with them a rich diversity of textiles – tapestries, carpets, clothing, fabrics and fibres.

The purpose was to show how this mix of people, cultures and trade influenced textile design and the sharing of motifs, styles, stitches and techniques around the Mediterranean. It was very thoughtfully put together.

Here’s a striking work from the exhibition: 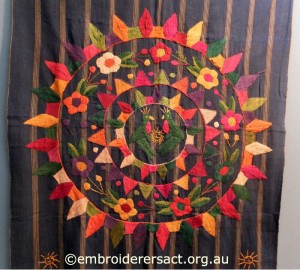 From now on I’ll be concentrating on the various embroidery techniques and traditions shown at Italia Invita starting with Punto Antico and Reticello in the next post.