Somehow I blinked and a whole week has gone! It’s been a busy week with school holiday classes and getting ready for Young Stitchers tomorrow but more about that in the next post.

In this post I’m going to focus on Punto Umbro embroidery and Puncetto Needlelace.

Italia Invita was held in Parma which is in central Italy in the region of Reggio Emilia.The Region of Umbria is also in Central Italy and this meant that quite a number of Umbrian Associations and embroidery schools were represented, mostly from the province of Perugia. Most people go to Perugia (the city) for its chocolate festival but for stitchers it has the bonus of an incredibly rich textile history – Punto Umbro is just one facet.

Punto Umbro means Umbrian stitch. This technique was developed at the turn of the last century by an American woman Romeyne Robert who married an Italian nobleman, the Marquis Ruggero Ranieri di Sorbello. They married in 1902 and went to live at the Palazzo Sorbello in Perugia. This Palazzo is now a museum and includes some exquisite examples of Punto Umbro embroidery which you can see here.

Romeyne Robert established an embroidery school on one of their estates at Villa Pischiello near Lake Trasimeno. The woman she chose to lead the school was a talented needlewoman from Florence called Carolina Amari. These two women made a great team and the school ran very successfully until 1934.

The Punto Umbro technique developed from their study of antique Arab embroideries in the collection of the Countess Edith Bronson Rucellai of Florence. They gave a new lease of life to arabic stitches that had been used in Italian, Spanish and Portuguese embroidery.

One of the most important was Punto Avorio (Ivory Stitch) which is one of the oldest needlelace stitches brought to Italy by the Arabs. It’s also found in Puncetto needlelace which we’ll talk about a bit later.

The name of this stitch is said to come from the designs and motifs on the ivory grates in the walls of the harems.

In Punto Umbro it’s used both as a surface stitch and a needlelace stitch.

You can see the surface version in this detail from a work on show at Giusy Federici’s stand at Italia Invita – it’s used in the outline of the heart: 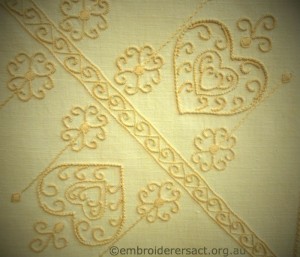 The other characteristic  stitch that you can see here is punto ricciolino (little curl stitch) which is used on the curlicues in the flowers and leaves. It’s an inverse version of Palestrina stitch. If you’d like a closer look just click on the photo to enlarge it.

In the next photo you can see the use of Punto Avorio needlelace in the insertions on the tablecloth: 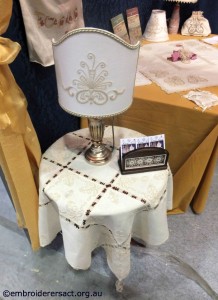 Just as a technique like Crewel is defined by the use of certain fabrics, threads, designs and stitches (i.e. linen/twill, wool threads, Jacobean designs and certain stitches) the same is true of most Italian traditional techniques.

In the case of Punto Umbro the key features are:

This embroidery has a very textured surface created by the extensive use of knotted and filled stitches. Interestingly herringbone stitch is sometimes used to fill shapes outlined in stem stitch. In the more elaborate pieces raised stem stitch is also used to great effect.

While Punto Umbro doesn’t have the elegance and refinement of Punto Antico, it’s a very attractive style of embroidery because of the elaborate surface, interesting motifs and very tactile quality.

Because of the fabrics used it’s very hard wearing and versatile for household goods such as these cushions: 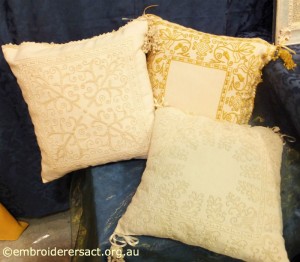 There were two stalls with Punto Umbro work at Italia Invita.

One was that of Giuseppa (Giusy) Federici who has written a number of books on this technique. She very generously allowed me to photograph some of the pieces she had on show. Here are some more photos from her stall: 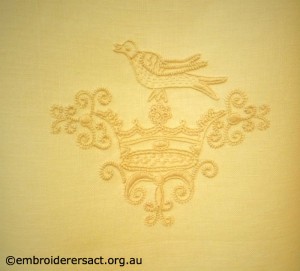 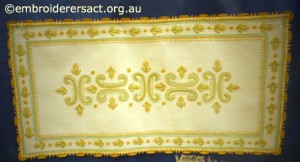 And here is the cover of her book on Punto Umbro: 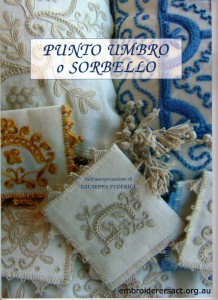 I’m working on a sampler of stitches from this book which also has a very good selection of patterns from easy to more advanced. While the text is in Italian the stitch illustrations are excellent.

There’s been an interesting conversation going on over time between Giusy Federici and Meri Almeida on the Avomeri blog.  They’ve been exploring the similarities and differences in the stitches  and traditions of Portuguese embroidery and Punto Umbro – most recently in a post on 28 August 2013. You can see the Sampler from Giusy’s book in Meri’s post of 7 December 2012 – the easiest way to get to this post quickly is to go to the ‘search’ box at the top right hand side of the blog header and key in ‘Giusy Federici’ then hit the return key and then go to the post.

The other stand belonged to a woman from Perugia called Genevieve Porpora. She recounted that she learnt Punto Umbro from Margherita Biancacalana, the last surviving student of the Marquess Romeyne Robert’s school.

Genevieve Porpora has also published a book on Punto Umbro with a modern twist – some of the traditional patterns are stitched in black on white.

Here’s a look at the cover: 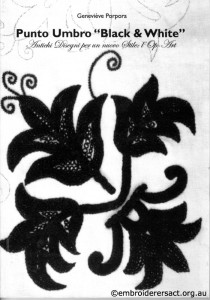 Again the text is in Italian and I’ve found that the stitch diagrams are not as detailed or helpful as those in Giusy Federici’s book. I bought this book for the patterns which include a number with birds. These can be worked either in the black or the traditional thread colours.

Punto Avorio links Punto Umbro and Puncetto needlelace. This style of needlelace is used in the insertions and edgings of Punto Umbro work.

Puncetto is a knotted needlelace made using only needle and thread. You don’t use a hoop as there aren’t the same issues of maintaining tension that exist in needlelace styles based on buttonhole stitch.

It comes from the Valsesia area of the Piedmont region in Italy. The School of Puncetto Valsesiano (La Scuola di Puncetto Valsesiano) from Varallo was at Italia Invita and here are some photos of their work which they generously allowed me to photograph:

A selection of traditional doyley styles… 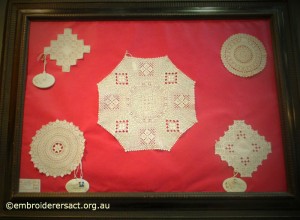 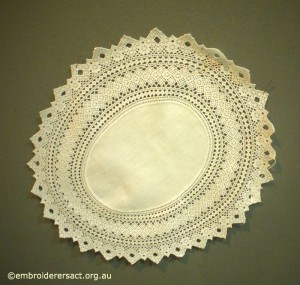 A decorative element in a table runner… 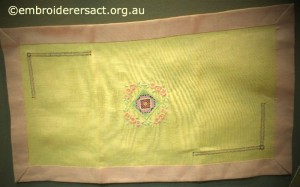 Colourwork inserts on a traditional costume and household items… 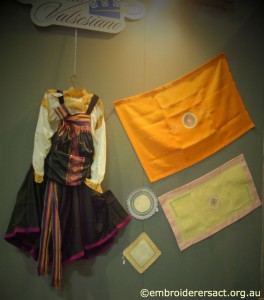 The School had various books for sale and I asked the women manning the stall for some advice on the best one for a beginner and they recommended the following book: 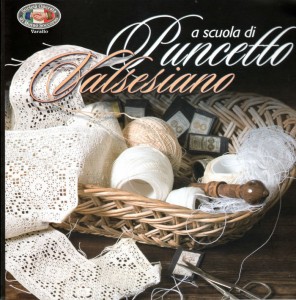 I haven’t yet had a chance to use this book but it’s based on very extensive and detailed diagrams.

If  you’re interested in more information on either Punto Umbro or Puncetto then head to the blog Italian Needlework. If you scroll down the left hand side of the blog you’ll see the extensive list of headings.