One of the delights of  Italia Invita was seeing so many different traditional Italian embroidery techniques.

In quiet moments when I think back to Italia Invita the embroidery that made the most visual impact was Ars Panicalensis – embroidery on very fine tulle. Here’s a small example:

(this photo and associated copyright is from www.umbriatouring.it)

The pieces on show were exquisite, delicate, sumptuous with an extraordinary level of craftsmanship. You got the sense of artisans at work. 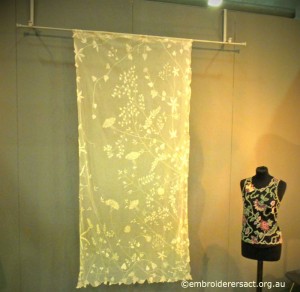 The name simply means the art of Panicale which is a small medieval hilltown in Umbria in the province of Perugia. It’s located about 25 kms SW of the city of Perugia.

Ars Panicalensis is part of the rich embroidery history of Umbria. The technique is historic with records in Panicale going back centuries to the medieval period.

It had its heyday in the 19th century especially in ecclesiastical embroidery for altar tablecloths, vestments etc. You can see examples of antique pieces in the local Tulle Museum in the 15th century church of St Augustine, Panicale.

The catalyst for the success of this technique was the invention of a mechanised loom for producing tulle in 1809. This made Ars Panicalensis a commercially viable alternative to needlelace.

Like a lot of other Italian embroidery techniques it gradually faded in the late 19th century. Then in the 1920s along came Anita Belleschi Grifoni who was passionate about Ars Panicalensis  and about helping local women to find a way to support themselves and their families economically. This was incredibly important at the time as most regions of Italy faced desperate poverty after WW1. So her work is very important from the perspective of women’s history as well embroidery history.

She founded a school of embroidery in the Ars Panicalensis technique  and set up the Tulle Museum in Panicale. She also invented the name as a way of marketing the technique. She sent samples to the then royal House of Savoy and in this way made Ars Panicalensis very fashionable with noble and wealthy families in Italy for wedding veils and dresses, christening robes etc

Fast forward to Italia Invita 2013 where Paola Matteucci had a stand. Paola is regarded as the leading expert and teacher of this technique in Italy. She lives in Panicale, teaches workshops in Ars Panicalensis and acts as a consultant to the Tulle Museum.

Here are some examples of her work from Italia Invita: 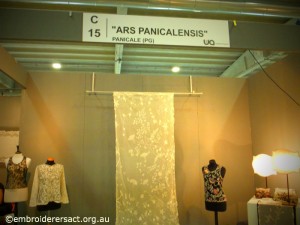 Here’s a closer view of this delicate and elaborately worked top: 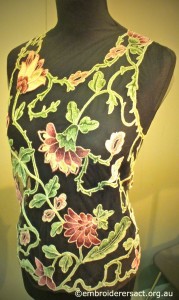 The piece that grabbed everyone’s attention was the centrepiece of her stand: 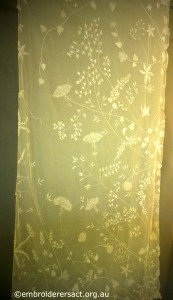 If you’re interested in exploring this technique further then it’s worth a visit to Paola Matteucci’s website where she showcases her embroidery school, books, kits and embroidery services.