There are lots of reasons to feature the piece of embroidery in this blog – looking at it makes you feel cool in the sweltering heat of December, it’s charming and the technique is intriguing. For those of you in the northern hemisphere I hope it feels Christmassy….

There’s also Pat Bootland’s joie de vivre in experimenting with various techniques to create an effect. Her love of embroidery is infectious! She’s also a great fan of the Narnia books and in this piece she wanted to create in stitch the scene at the beginning of The Lion, The Witch and The Wardrobe…. 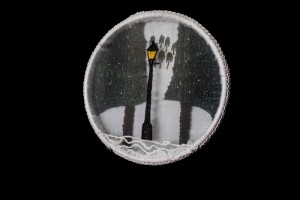 Looking at this piece up close I couldn’t work out how she’d put it all together so I called her in Canberra and she took me through it step by step.

First of all she took the inside ring of an embroidery hoop and wound white fabric around it to create a frame: 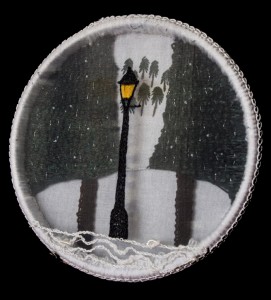 You can see this frame under the top layer of organza.

To create the background she decided to use the same technique as that to make a dorset button but on a larger scale. So she used needleweaving to create the two large pine trees in the background and to attach them to the frame: 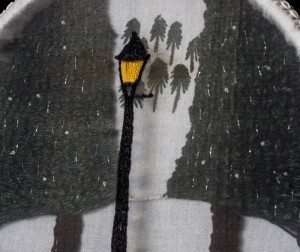 Next she embroidered the small pine trees on to some white fabric and attached them to the back of the frame behind the large trees. This gives depth and perspective to the scene.

To evoke the atmosphere of the street lamp on a snowy night she embroidered the lamp post onto a piece of organza and added tiny dot and linear stitches to give the sense of snow flakes drifting in the cold air: 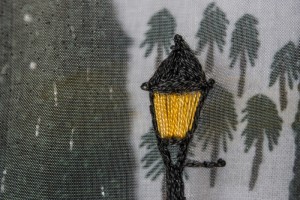 If you look closely at this photo and the previous ones you can see that the layer of embroidered organza also creates a shadow which just adds more perspective and authenticity to the scene.

Then Pat came up with a very cool (no pun intended!) trick for a more complex and subtle spatial dimension – she added some textured threads to suggest a foreground with snow on the ground: 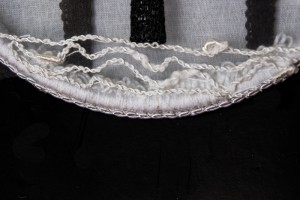 The final step was to attach the organza to the front of the frame and add cord around the outside of the frame to finish the piece neatly.

Magic just magic!!!! What do you think?…… and have you found the explanation of Pat’s technique helpful?

Take care if you’re travelling over the Christmas period.