As you may have guessed it’s been inspired by the commemoration of WW1 which begins this year. The Challenge is an opportunity to reflect on that event and to re-interpret one of the most popular and sentimental objects of the period – Silk postcards. These are known among collectors as Silks.

Here’s an example that Jillian and Stewart Bath found at the Claremont RSL in Tasmania: 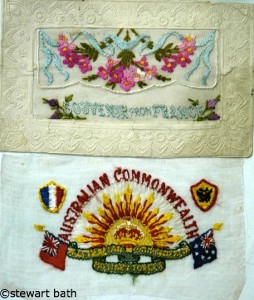 The Challenge is to re-interpret these silks in your own way. There are no constraints about the fabric or techniques used. The main requirement is that the postcard must be presented in the card stock supplied in the Challenge envelope.

For me I’m going to do some thinking about my family during WW1. There was no Australian branch of the family then. Both my grandfathers and more than a dozen great uncles fought on the Italian side on the Eastern front alongside British and Canadian soldiers.

All the entries in the Challenge will be part of a curated show at the Guild’s 2014 Annual Exhibition.

Here’s a closer view of the postcard: 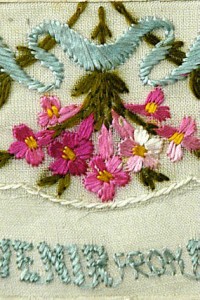 Some historical context for the Silks

These postcards had their heyday from 1900 to 1920 when postcard collecting was a popular hobby. The peak of production was during WW1 when it’s estimated that around 10 million were produced. They were popular with servicemen serving on the Western Front and many were bought in Paris on their way through to the trenches. The designs are usually large and colourful and reflect the popular culture of the time. 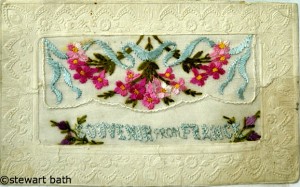 These silk postcards were usually machine embroidered on huge Heilmann or Schiffli machines that could take a large panel of organdy and stitch a repeat pattern 400 times. This is how so many designs could be produced consistently in huge quantities. These panels were then cut up and each repeat inserted or attached to card stock either plain or embossed.

There were smaller embroidery machines that allowed women to do piecework on the panels from home. These generally produced 25 repeat patterns to a panel of organdy. These were then sent away to factories to be put into card stock.

In the more elaborate and expensive designs hand embroidery was used to finish the postcard and add fine detail. Some of the very early examples also have more hand embroidery. As the war progressed and more and more postcards were produced the quality deteriorated.

One of the most poignant aspects of these silk postcards from WW1 is how such a simple, mass produced object could capture and transmit such deep personal feeling and meaning both to sender and receiver – love, caring, hope, longing, reassurance, patriotism.

The other paradox is how such delicacy could be mass-produced. One of the reasons the materials used to create the textile part of the postcards could be so flimsy is that they were not generally sent home in the open mail but rather in military mail pouches.

There are many examples of these Silks with embroidered sheer envelopes attached to the card stock. The servicemen inserted a handwritten card into these. These were popular because the soldiers often had very little time to write something as long as a letter. 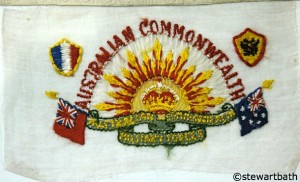 Where Can You Research these Silks?

The Australian War Memorial has a large collection of these postcards which you can read about here.  They also have some on display in their Research Centre which is located at the back of the Afghanistan display.

You can also arrange to have access to the postcards in their Collection for research purposes but to do this you will have to complete a Registration form either at the Research Centre or online.

Embroidery & Cross Stitch Vol 21 No1 has an article on these Silks on pages 36-39. It’s titled Mementos from the Western Front.

The book Sites of Memory, Sites of Mourning: The Great War in European Cultural History by Jay Winter. This is a useful reference for giving context to what happened during WW1.

Kate Davies’ post of 9 April 2013 on her Needled blog titled A Kiss From France – her post is very interesting because she collects these Silks and she’s a researcher in Women’s History and a designer. She also includes photos of some stunning examples from her own collection. Go and have a look……..

If you find any other good sources of information please let me know and I’ll add the information to this list.

If you have any examples of these postcards we’d love to photograph them for the website with your permission.

Have a great time with this Challenge!