This post is specially for those of you who love Sashiko.

I’m sharing a Sashiko Sampler Quilt designed and stitched by Jennifer Zanetti. It’s a large quilt that would easily fit a Queen size bed and is an absolute tour de force. Here it is hanging to give you an idea of the size: 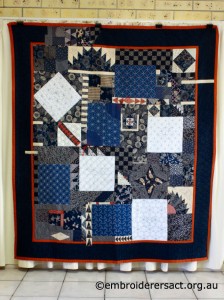 It’s full of detail and in real life the visual effect is that the Sashiko Samplers seem to ‘float’ on the surface of the quilt.

The word Sashiko means little stabs or little stitches.It is a traditional form of Japanese needlework that evolved in the Edo period (1603-1867).  In this period there were sumptuary laws that delineated class lines by defining what people could wear. Only the nobility could wear silk, bright colours and large patterns. Commoners (merchant and peasant classes) could only wear homespun fabrics dyed with indigo.

Cotton was imported and beyond the means of ordinary people. So they spun cloth from hemp, wisteria and paper mulberry. It’s thought that the original fabrics had a loose weave and the warp and the weft provided linear patterns for the running stitch. At this time cloth was a precious commodity because it was time-consuming to produce so it was imperative to find ways to conserve scraps of old clothes and re-purpose them.

So the origins of Sashiko are utilitarian and developed out of necessity. It was used to strengthen cloth, quilt layers together to create warmth and to mend and recycle worn out clothes. The indigo dye was durable and thought to repel insects and snakes.

The Sashiko patterns also had a spiritual significance e.g. where the threads of stitches cross over is called the me which in Japanese means ‘the eye’. These ‘eyes’ protected the wearer and in the museum examples of the garments worn by fishermen and farmers you can see that they are densely stitched with Sashiko patterns and hundreds of ‘eyes’.

If you want to read more about the history of Sashiko there’s an interesting essay here by Michele Walker who has worked with the last generation of women to practise Sashiko in Japan.

You’ll find a really useful set of tips on Sashiko plus a great listing of other resources here.

Now for a closer look at those  Sashiko Samplers and some awesome eye candy. Here’s a striking combination that deploys the Asa no ha pattern between two fans: 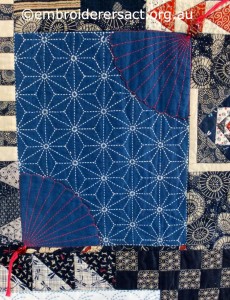 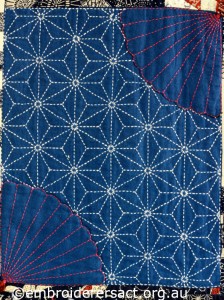 This next one is a variant of the Schippo tsunagi pattern 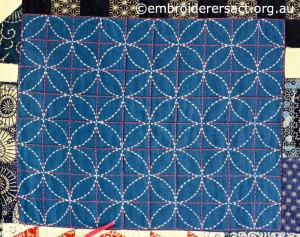 While the next block is a more complex variation of the same pattern: 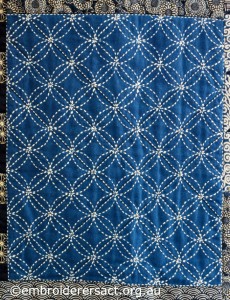 and this is for all of you who love to look at the stitching in detail: 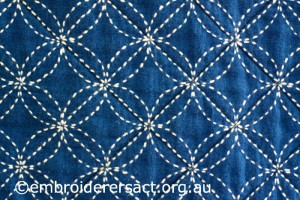 The last in the indigo series of Sashiko blocks is this Maru-Bisha-Mon: 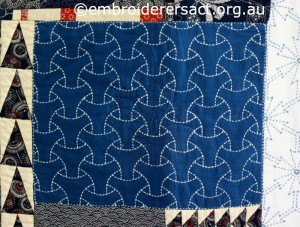 The variation in the blue is due to the light sources in the room. On the quilt block it’s a uniform colour.

The indigo blocks are balanced in the quilt by a series of Sashiko Samplers in white with an added decorative theme. Jennifer has added a stitched bird to all of these white blocks.

We’re starting with  the  Hana-bishi pattern: 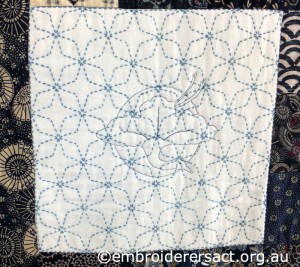 and then on to the Nowaki pattern: 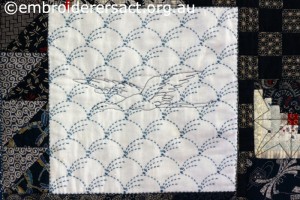 and then the Hana zashi pattern 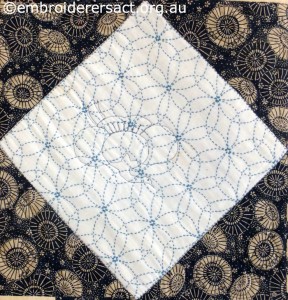 and this pattern which I haven’t been able to identify: 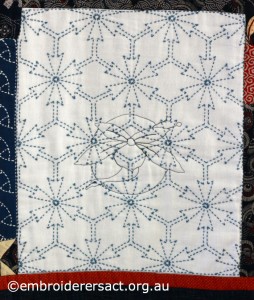 The final white block has the Seikai-ha pattern with a quilted panel as contrast: 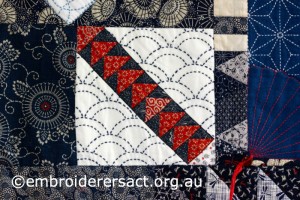 There are also Sashiko quilting elements in the design which create a visual and textural effect: 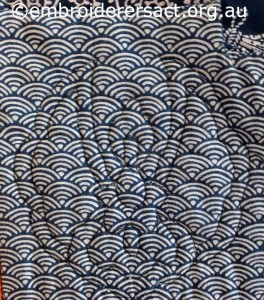 I really haven’t done this quilt justice as the overall design is incredibly intricate and complex. Jennifer’s choice of fabrics complements and in some cases echoes the Sashiko samplers. The geometry and spatial configuration of the blocks alone deserve a blog post.

But I have picked out one of the many decorative blocks in the quilt to share with you as the end note for this post: 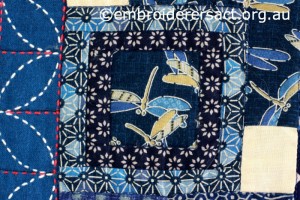