Friday evening, and some people were all set up and raring to go, fortified by a glass of some bubbly stuff, and  Liz Bell was easing herself into things with some knitting.  My lips are sealed regarding the identity of the person who arrived having left behind her bag of clothing, but at least she brought the most important thing, her needlework! 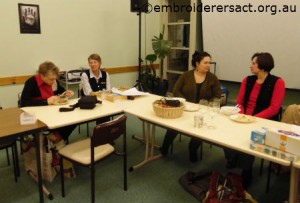 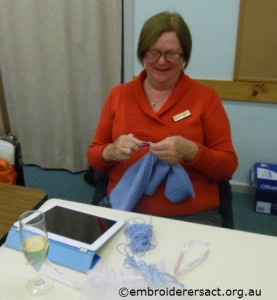 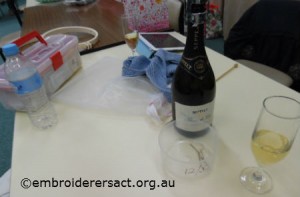 But in case you thought that it was all eating, drinking (seriously, it was mostly tea, coffee or water), and making merry, here is a glimpse (in no particular order) of what some people worked on over the weekend. 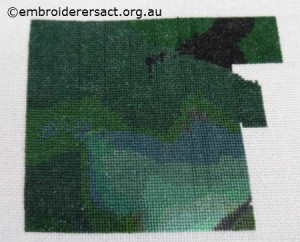 Anne Stewart was working on this petit point project, which will become a dragon entitled “Woodland Guardian’, from Heaven and Earth Designs.

Kathy Pascoe began with this “Away in a Manger” stitchery kit from Button Bliss.  Wooden nativity figure buttons will be added, and Kathy plans to add a Christmas themed border and make into a wall hanging. 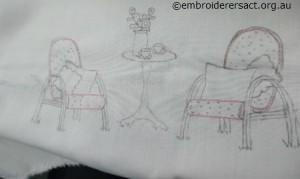 Once she had gone as far as she could with the stitching on her first project, Kathy moved on to this sweet project incorporating stem stitch, french knots and backstitch. 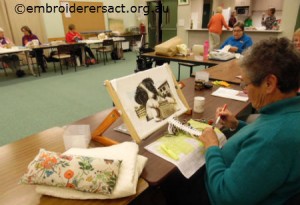 Diana Churchill began the weekend continuing on a counted cross stitch for her grandson, who just loves border collies.

… and here is the completed work.  The puppy’s name is “Shadow”. 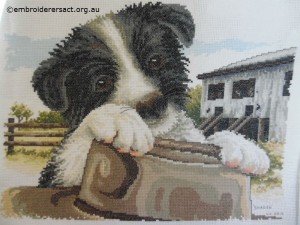 There’s more than one lucky grandchild who will receive a beautiful gift.  Prue Deacon was working on her original canvaswork design for her grandson, who loves all things relating to the beach.  This has a seaside theme incorporating elements from family photos and seaside pictures. 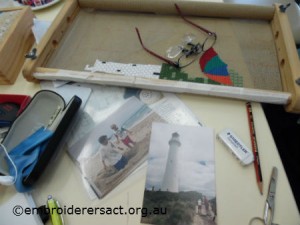 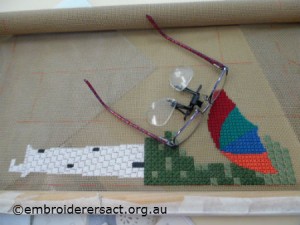 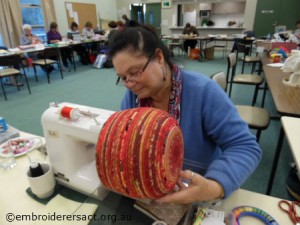 Ruth Ellis came equipped with her sewing machine to make more of her fabulous fabric bowls. 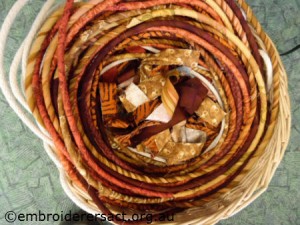 Ruth says it takes about 40 metres of fabric-covered cord to make each bowl.  Apparently wrapping cord with fabric is a great TV-watching activity!

I’m going to make you wait for another post to see some of Ruth’s finished work, and much more.  There’s plenty more stitching activity to show from Greenhills!  I tried to take detailed notes, but if I’ve inadvertently left out acknowledgements, I’m sorry, the talking, stitching and eating were very distracting!