Today I thought I’d show you a beautiful blackwork Wedding Sampler that Janet Pearce designed as a ring cushion for her daughter’s wedding in London.

It turns out that making ring cushions for her children’s weddings is something of a tradition in the Pearce family. Here are two early ones she made – the photos have been scanned from photocopies so please excuse the quality.

The first one was done in 2000 for her daughter Jane’s wedding and features delicate blackwork with some exquisite needle lace inserts: 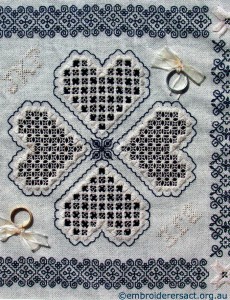 The second cushion was done for her son Michael’s wedding in London in 2011. He had a special request – he wanted the church incorporated into the design. So Janet designed and stitched this detail into the cushion: 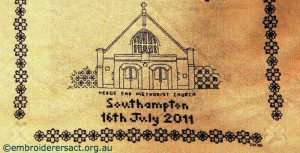 The third cushion was stitched for her daughter Kathryn’s wedding in London in 2012 – and this was a biiiiig design challenge. The brief from her daughter was for a cushion that incorporated the London skyline (Kathryn nominated the buildings she wanted included) and some cats!

This cushion was in two parts – one side was a traditional heart design: 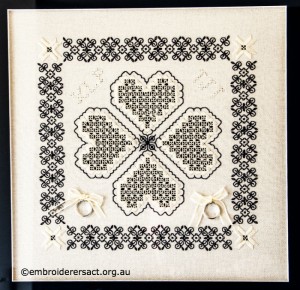 Here it is in more detail: 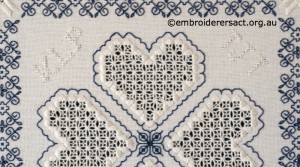 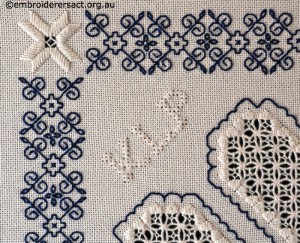 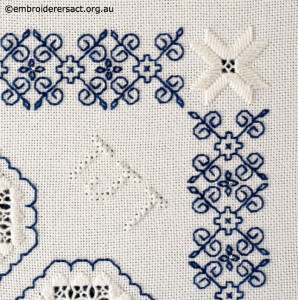 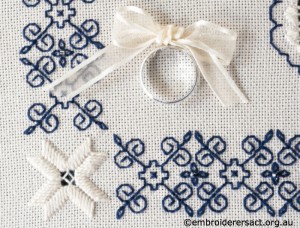 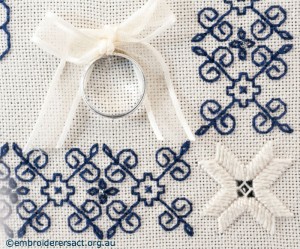 The other side features the names of the bride and groom and the London skyline design. Janet says that this turned out to be a huge challenge because she couldn’t find any patterns or designs available commercially. She spent days on the internet looking for ideas and possible suppliers – with no luck.

So she asked her architect husband if he could  draw a London skyline that included the buildings their daughter wanted. He rolled up his sleeves and came up with some architectural drawings that Janet then had to interpret into stitch. She also had to somehow include some cats into these buildings.

Look what she came up with:

Isn’t it just beyond awesome and clever!!! It just makes you smile!………and there are some delightful details in the design that create both a story and a piece of embroidery to be treasured: 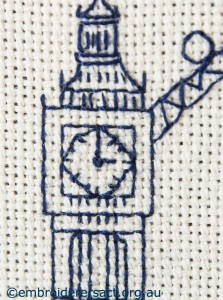 Big Ben shows the time that the wedding service started. 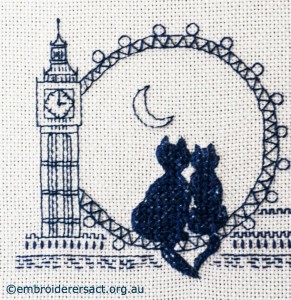 The bridegroom’s name was Tom and the bride’s Kat so Janet took her inspiration for this very fun and quirky element of the design from vintage storybooks and cartoons that show ‘tomcats’ on the night skyline. Just too cute.

She also decided to finish the design with running stitch along the bottom to suggest the river Thames and this gives the picture an extra dimensionality.

The London skyline design element had to fit into 80 x 30 threads on 25 count Lugano. It was stitched over one thread. Janet found that even a single strand of DMC cotton was too thick for certain parts of the design such as the dome of St Paul’s and the small circles on the London Eye. She then tried silk threads but these also had problems. In the end she used sewing machine thread and found this did the job. 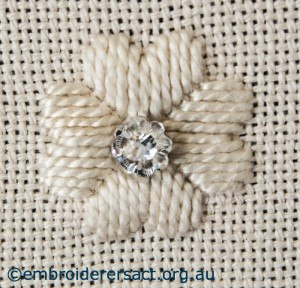 After the wedding the cushion was converted into a sampler and framed and it’s just beautiful. It’s a wonderful example of how embroidery can create wonderful memories and a treasured heirloom but also have such verve and flair.

Janet this is so clever and technically skilled – well done